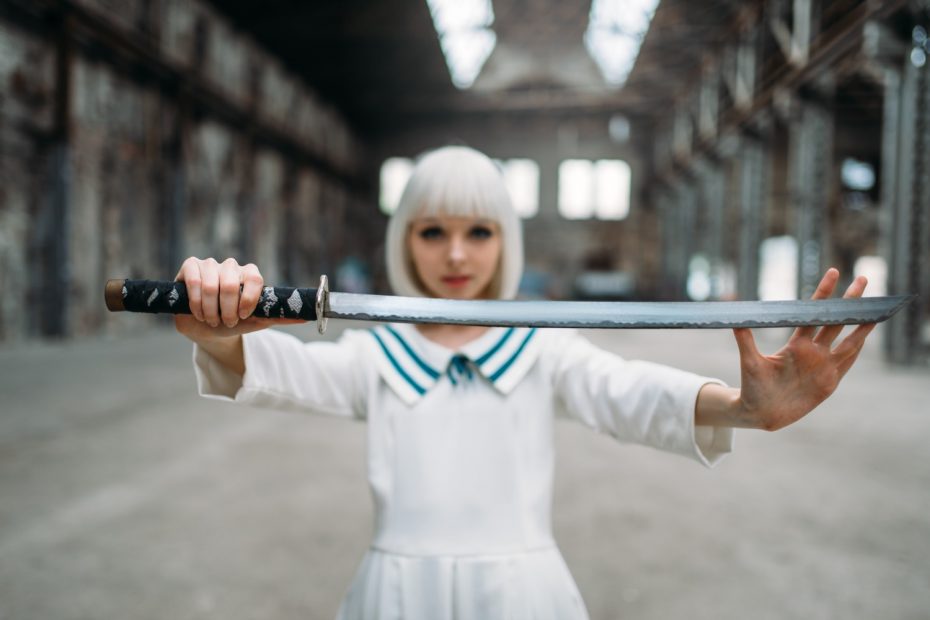 This is a Genre relatively new to the world, compared to Comic Book Classics like Superman and his assorted associates. The Japanese are keen on their eccentric blueprints/plots for their characters, and oftentimes the weapons they create make all the difference in this level of Extravagance. These Artists have defined themselves as pioneers in the world of Originality. Especially when it comes to the weapons! Yet, they are contrasts in and of themselves. Some of the weaponry is TOO big to handle, others supremely too powerful. A List of the Most OUT-OF-CONTROL, awesome Anime weapons is right here!

The Anime God Eater are ammunition assembled out of the Cells of Argami. These are the Godless villains of mankind. They were actually almost responsible for completely destroying physical nature. God Arcs are weapons that are alive and kicking, only to be used by those with the right and the Power to properly handle them.

There are two categories of God Arcs. The all-encompassing gun-types for proper reinforcement, and the limited swords that are meant to REALLY hurt you! Yet, there was a pot of God Arc brought together within the series. One that was a machine gun AND a sword combined. They are infinite attackers meant to destroy with ammunition for the long-haul.

A Bankai represents numerous weapons simultaneously. In Bleach it is certainly the most important component written about. To helm a bankai, the retainer must be entirely at ease with their Zanpakuto’s Spirit. All the weapons within a bankai are individual but each one has an enormous Power once exposed.

The Sword of Momochi Zauza is HUGE! Its width and length beyond any other. It’s actually quite comically enormous, until used for its ultimate Powers. And it CAN NOT be destroyed. Once broken, for whatever reason, it rejuvenates itself. Maybe with the human blood it oozed after splitting someone in half. Its Glory is ultimately restored. Now that’s COOL!

The stuff looks more like a way to move than a deadly weapon. But when the Survey Corps gets hold of this Gear, it explodes into equipment able to go everywhere! It can stab enemies with hooks and slash them with one of its crazy cutters. A Titan isn’t simple to take down, unless you’re Eren Yeager. But this 3D Maneuver Gear definitely helps…

Kisame Hoshigaki uses this sword that lives on human’s chakura when it slices through a victim. It’s a Great Blade of the Seven Ninja Swordsman of the Mist. It looks more like a giant bat than an actual sword though. The shaped skewer-like projections protruding from it make it really scary though! Samehada translates to “Shark Skin”. It can de-scale its opponents and eat their chakra… leaving them weak, defenseless, and alone. Cool.

Yoru is the Black Sword of Dracule Mihawk. Devil Fruit users beware! The Yoru is after you!

Orbs are the buoyant balls supporting Naruto and Hagoromo’s chakra. They eventually become the Ten-Tailed Beast. These Orbs are absolute. They are handlers of all FIVE of Nature’s elements. Far supreme to Kekkai Genkai and Kekkai Tota, and their respective talents. They have nothing on the Truth-Seeking Orbs!

The Orbs can become cannon-like power bowling balls. Or as a defense, to cover from oncoming danger. It’s an amazingly COOL weapon because of its duality. The only way to negate these balls is by administering Sage Jutsu- a talent much the force from Star Wars. Most are incapable of it.

This is an old magic trick. The Castur is actually the one using this “mana”. As time went on, the term became the name of guns used to shoot caster shells. The idea of these is quite deep in fact. They are a combined force of an entirety of mana, and they become bullets! They are essential to the demolition of all kinds of magical practices. The guns of Castur form all different versions, as do the bullets they excrete.

Punisher is vicious! A combination of all kinds of weapons that can be put together or assembled differently. Much like a Transformer. Vashe Stampede used a Punisher famously as a combination of various weapons, separated along both his Left and Right arms.

These are the two names of the Katana brandished by Goemon Ishikawa XIII. Goeman is a component of the Thieves Gang, led by Lupin III. Ryusei is the Magna name while Zantetsuken is the Anime denomination. The Katana shows a scarily razor-shape blade that will tear through anything. Like, ANYTHING!

This is the Sword of Zoro’s that emitted the injury to Kairo. It is a weapon with the Powers to seep the user’s haki. Zoro possesses Wado Ichimonji and Sandai Kitetsu. Emma substituted the Shusui as his third Sword.

This is a very unusual armament of the Doves. It is efficacious against Ghouls in Tokyo Ghoul. The weapon is the product of the “inners” of a Ghoul. They are the organs that create Kagune. Yet, ordinary people use Quinques. But they MUST hide them in things like luggage carried by the Doves or Ghoul Inspectors. The title Quinque actually comes from the originating term Ghoul.

This notebook is one of the DEADLIEST in the Anime Universe! It’s Witchcraft. If you write the name of your rival within it, they WILL DIE! You have to know their REAL name though, or else the spell won’t work. AND exactly what they look like! With this most basic of information, you can simply write down how you want them to go, and they will! Very Cool idea.

But this Anime has been banned in so many countries, considering the exuberant number of teenagers who have invented their own disturbing versions of it. All in order to rid themselves of that noxious Bully lurking around the schoolyard corner…

The conjured book of Chrollo Lucilfer, the Head of the Phantom Troupe, used this text as a way to rob his rivals of their abilities. Then completely make them his own! Although it’s Genius, it doesn’t always work…

He used it to bring forth a poisonous blade while fighting the Zoldycks. The weapon was meant to retain the Fun Fun CLoth from Owl, a member of the Shadow Beasts.

Voltron’s the Defender of the Universe. And when it is segregated, five lion ships come together, and it becomes one of Anime’s deadliest killing monstrosities. Singularly, the ships are still powerful because of experienced pilots and the tools they have at hand.

Lion Torches is an added component. The Lion Head Attack, Sting Ray Missiles, and Ion Darts are some of its most vicious pieces. Then there is The Blazing Sword. It contains an energy brought forth when Voltron slams its fists together! And Voltron LOVES to slice Robobeasts right in half!

Put your cheap Magic Tricks aside! In the most demonic grasp, cards can become horrible devices of death and destruction. They are essential to the weaponry within the world of Anime. Hisoka Morrow, from Hunter X Hunter, is probably the most devious of card abusers. He can use them in ways more violent than any finely sharpened knife. Slitting throats, wrists, veins… His weapon is completely the COOLEST within the world of Anime! Beware Magicians! And anyone in general actually.

Tessaiga means, “Iron-crushing Fang.” This clearly describes Inu Yasha’s weapon. He received the sword from his Father. It was actually made from his Dad’s own fangs. This “Sword of Life” makes it possible to revive 100 Dead Lives, back to the living world. This intense cutter is able to mutate and retain the gifts of anyone or anything it comes into contact with. All in all, its power just keeps on growing… Especially every time it’s used in battle.

The Dominator Portable Psychological Diagnosis and Suppression System is COOL as shit! It’s a government-issued gun held only by Inspection and Enforcement Officers in Psycho-Pass. It is able to read a personal, psychological profile of the recipient it is targeted towards. If the target exceeds a “crazy” level, the gun will fire! This weapon is highly intelligent and way before its time. But when you think about it, quite possibly real in our own near future. It has four modes: Non-Lethal Paralyzer, Lethal Eliminator, Destroy Decomposer and an Explosion component.

The only one that can hold The Sword of Rapture is Gilamesh. Therefore, it is custom designed only to him. It may be dull by another sword’s standards, but it can still cut through pretty much anything it contacts. It’s a smartie as well. It gives wisdom and inspiration to those bestowed by its intercourse. This is a deep representation, considering it existed long before “Heaven and Earth were Split.”

In this Manga and Anime, a Death’s weapon is used to pursue and consume 99 Kishin Eggs. These are actually Human Souls! The final necessity is one Witch’s Soul. This is when the Death Scythe comes to fruition. The Scythe is a shapeshifter, altering its appearance and purpose. This gives Power to the Wielder to transform their own powers and tricks while possessing the coveted Scythe.