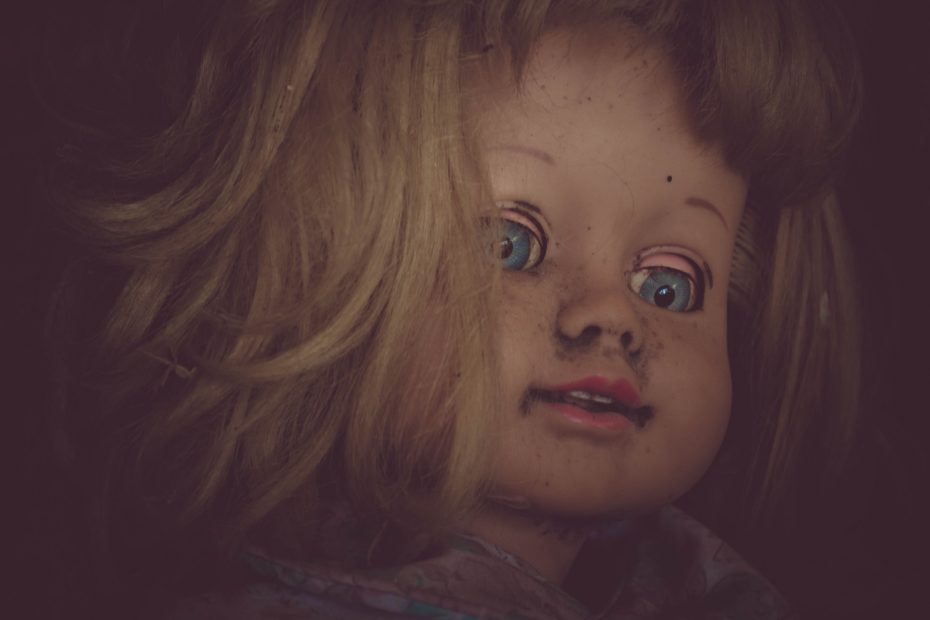 With all due respect to the Great Gabbo and Puppet Master, most people alive today think of the movie Child’s Play and Chucky as being the first horror movie to feature a creepy doll. Though it didn’t just shock, thrill and amaze people. It opened up a whole new horror movie genre that made creepy dolls bone-chillingly cool!

In homage to the creepy dolls of movies past and present, we decided to take a slightly closer look at some of the most malevolent children’s toys to ever grace the silver screen.

The Great Gabbo was playing in movie theaters way back in 1929. It’s not technically a haunted doll, with any supernatural powers. Instead, Gabbo is more about a mentally ill puppeteer with a crush on his assistant who seeks revenge. The doll itself is creepy, but it’s really about the deranged nature of the puppeteer who uses the doll as a sort of split personality that enthralled audiences.

Here again Magic is more about a mentally ill performer than it is about a haunted evil doll. It stars a young Anthony Hopkins who is a struggling magician with severe mental health problems. His act focuses on a lot of ventriloquism and a creepy looking pupped he calls “Fats.”

For a portion of the movie, the audience is left wondering if the doll is possessed by an entity named Corky. Toward the end, we find out that it’s actually a split personality of the Anthony Hopkins character with malicious intent.

Puppet Master came out in 1989, just a year after Child’s Play, and seemed to be riding on Chucky’s coat tails. With a sparse budget, it ranks more as a B-rated movie. Yet it drew enough cult fans to keep developing sequels. To the point that there are still horror movie buffs who host Puppet Master watch parties to this day.

The premise behind Puppet Master is that a group of psychics travel to a hotel where they find a man who’s committed suicide. The psychic gathering is mentally assaulted by horrific visions as an ancient Egyptian spell is released animating a band of evil puppets who hunt them down.

Currently, there are five puppet master movies, with 8 different off-shoot films. They span from 1989 to 2017. If you’re part of a watch party group, and you’re looking to binge-watch movies about a creepy doll not named Annabelle or Chucky, Puppet Master might just hit the spot.

Full Moon Features made Puppet Master, which did well enough to draw its own cult following, so they tried to reincarnate that success with the movie Demonic Toys, which touches on a lot of the same themes, except with more demonic possessions. Unfortunately, it didn’t do so well and ended up being a direct-to-video horror movie, though fans of the Puppet Master franchise often turn to it to wet their whistle.

Dolls technically came out a year before Child’s Play, and fans often try to claim that it was the genesis of modern-day creepy doll movies. Dolls also has a little bit of cheesy, yet morbid humor woven into it, but not to the same level as the apt one-liners delivered throughout Child’s Play and all its sequels and spinoffs. The explanation behind the dolls is that they harbor the evil spirits of imprisoned criminals that an elderly couple is keeping at bay.

It touches on the same creepy doll craze of the late 1980s but was a little bit buried by movies like child’s play. So it’s got a little bit of a retconned reboot in 2019, which tells the story of a struggling children’s book author and his rebellious teenage daughter. They move into a house they’ve inherited only to find out there are mysterious, suspiciously evil dolls left behind in the attic.

Released in 2007 Dead Silence has a little bit of an Annabelle vibe, yet it came out before the Annabelle movies, so it still manages to stay in its own lane. The story focuses on Jamie Ashen, who is played by Ryan Kwanten.

His wife meets her unfortunate end, and the downtrodden widow then returns to their creepy hometown of Ravens Fair. As the plot advances, he’s driven to unravel the mystery of his wife’s grisly murder.

Ashen eventually discovers the legend of Mary Shaw, who was a murdered ventriloquist puppeteer whose eerie presence still permeates the town. He continues to desperately search for answers, only to realize that the curse that took his wife’s life threatens him as well.

The Boy stars Lauren Cohan, who plays a young nanny named Greta. She takes a job caring for an 8-year-old boy in a remote English village. Though she’s surprised to find out that the supposed child she is supposed to care for is actually a life-size doll.

She carefully plays along, helping care for the doll as if it was human, intending to help the couple to cope with the death of their real son some 20 years earlier. There’s also this notion floating in the air that she needs the money.

However, the couple has an intricate list of strict rules. When Greta accidentally breaks one of them, it leads to a series of disturbing events that bring her worst fears to life. Eventually compelling her to believe that the doll is alive. In a way, the movie is as much about a creepy doll, as it is about one’s willingness to question their own sanity.

When Poltergeist came out in 1982 it had a lot of the same kind of blood-chilling vibes as other supernatural horror movies like The Exorcist. It starts with a series of strange eerie events affecting an otherwise average California family, the Freelings.

It stars Craig T. Nelson, as a dutiful father and focuses on the family’s five-year-old child Carol Ann, played by Heather O’Rourke. As the events escalate the ghosts commune with the family through the television set and other inanimate objects like a creepy-looking clown doll.

What starts out as a seemingly friendly and playful spirit suddenly turns menacing, and evil. In time the malevolent spirits take Carol Ann and go missing at that point. The parents, Steve and Diane turn to a parapsychologist and an exorcist to help retrieve their daughter and end the paranormal happening.

Throughout the franchise we eventually learn that the “Reverend” Henry Kane, AKA The Beast is the ghost of an angry cult leader who wishes to abduct Carol Anne Freeling to use her innocence as a way to capture souls trying to enter the Afterlife.

After this movie came out, kids everywhere were terrified to look under their bed for fear that a creepy clown doll was hiding underneath ready to choke us in our sleep.

Here again, the Saw movies are more about mental illness than they are dolls possessed by an otherworldly spirit. Though the Jigsaw “Billy the Puppet” will certainly make your blood run cold all the same. It’s a very popular binge-worthy franchise. Especially for people who are fans of the Torture genre of movies.

Most horror movie buffs divide the Saw movies into three eras. The Jigsaw Era, the Apprentice Era, and the Post-Post-Jigsaw Era. Though each of them has the same detailed traps, flashback scenes, self-mutilation attempts, and even a few creative mouth gags.

The Annabelle movie franchise is doing one heck of a job trying to take the title of best creepy doll horror movie from Child’s Play. Annabelle is featured in movies like Annabelle, Annabelle Creation, and Annabelle Comes Home, which are follow-up films to the uber-popular horror movie The Conjuring. Adding to the gravity of the movies is the fact that they are based on a real doll in the real world, and the experience of the demonologists Ed and Loraine Warren.

In the movies, Annabelle is depicted as an old wooden doll possessed by a demonic spirit, that we eventually learn is named Malthus. Annabelle wears a white dress and is decorated with the facial features of a vintage doll. Annabelle commits several violent acts, throughout the movie. This includes things like igniting a gas stove and smearing bloody words on the wall.

When Annabelle comes into the possession of the Warrens, we see her challenging the family and the sanctity of their home. Including affecting the health and mental well-being of their daughter. Though to this day, the real Annabelle doll is in the Warrens’ Occult Museum, located in Monroe, Connecticut.

Still clinging precariously to the title of Best Creepy Doll from Horror Movies is Chucky and the Child’s Play franchise. On the outside, Chucky looks like a beloved children’s toy. Yet its interior harbors the malevolent soul of a deceased serial killer known as the Lakeshore Strangler, Charles Lee Ray.

The story goes that the Lakeshore Strangler is being pursued by police and gets in a shoot-out with detective Mike Norris. Charles is mortally wounded by a shot to his leg, and his accomplice Eddie abandons him in a getaway van.

Completely out of options Charles hides in a nearby toy store but is fatally shot by Mike. Knowing his death is imminent, the Lakeshore Stranger hopes to use his voodoo soul transferring technique to exchange his soul for another human being. Unfortunately, he can’t find another person nearby to switch souls with.

In a moment of abject desperation, he grabs the Good Guy doll and swears to Mike that he will get his revenge. He then uses his amulet known as the Heart of Damballa, to transfer his soul into the doll. The store is then struck by lightning, and Mike finds Charles dead.

This is how Chucky is born and embodies the strong desire to kill. While his primary goal was to transfer his soul into the body of a nearby child, and get revenge, he can’t quite pull it off.

The mix of comedy, horror, and occult themes made the 1988 movie an instant hit and cult classic. It wasn’t long before what was supposed to be a one-off movie, exploded into one of the most popular horror movie franchises. It proved that creepy dolls could be the stuff of nightmares, spawning sequels, and spin off films that continue to this very day!