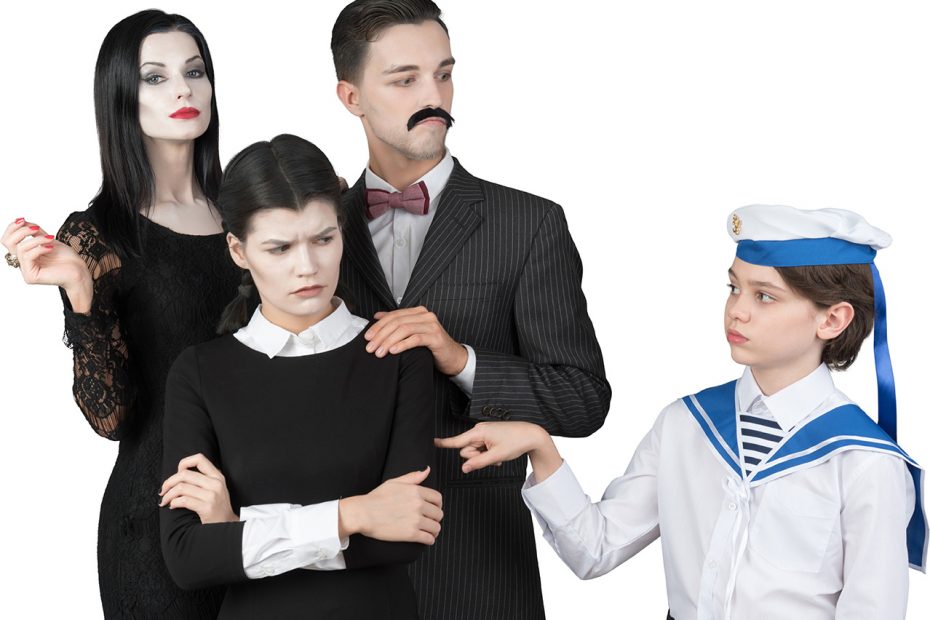 Three’s company, right?! But a crowd’s better, especially when you’re going out. To a party, a bar, or even just to hang out in your parents’ basement. Group Costumes should be fun and easy yet creative simultaneously. We all have our favorite “famous” cliques. Whether they’re a family, a gaggle of friends, or a cabal of protagonists vs. enemies, a batch of familiar faces together will ALWAYS make a pack more fun! Check out these examples of some of the greatest group costumes out there……….

Make a simple, yet profound statement with your friends by having everyone dress in jail garb. Everyone can wear the SAME EXACT thing— a bright orange jumpsuit! It’s simple, stylish and certainly makes a statement! Add some hand cuffs, or a pairing of prisoner ball and chains to add perspective to the look. Have fun but BEHAVE! The 5-0 will definitely notice your crowd!

We’ve ALL eaten McDonalds or a piece of pizza from the local corner spot. So why not get a bit corny with it? Try an outrageous array of different sustenance. One could be a giant foam box of French fries, another a piece of delicious cheese pizza. Someone else a campy giant pack of LUNCHABLES. Add ketchup and hot sauce and you’ve got a funny, funky, over the top array of fast food! Enjoy yourselves!

The stars of the early Universal spooks are easily recognizable and SCARY to boot! Frankenstein, Dracula, The Mummy, The Wolfman, Igor, The Creature from the Black Lagoon and Medusa. Fortunately, this exciting list of legends could go on and on……….

How cool would it be to celebrate the horror mythos of today? The new era that movie making has spawned?! Freddy of course! Jason‘s a given and Chucky certainly has to be invited to the party. The Michael Myers mask is emblematic in its own right. Art the Clown from Terrifier (2016) will…….. well terrify. And Krampus could add a dash of a little needed creepy Holiday cheer.

For the girls in the group, unfortunately the pickings are slim. You have The Bride of Chucky and Annabelle. When you think about it, this is an amazing juxtaposition. Ladies love monsters too, and their representation in the genre is far from exemplary. Personally, I’ve been writing a script for the first contemporary female movie monster who carries a movie on her own! Stay tuned for something strange you can sink your teeth into ladies!

He’s the maestro of the macabre, and a lot of times the darkly comic. A creative genius who gave us some of the most unique personalities in present-day film. Beetlejuice is the perfect, prime example of his mark on popular culture. And someone could dress as Lydia Deets, his apprehensive teenage goth-girl bride. A match made in the After Life!

Don’t forget about Batman and his infamous opponent Joker. Selina Kyle aka Catwoman is another puuuuuurfect addition! The Nightmare Before Christmas (1993) is now a classic with Jack Skellington and Sally. An exemplary romantic pair to add to this mix!

Sweeny Todd and his fellow female meat processor Mrs. Lovett would make a lovely little coupling within this collective. Don’t forget to shout out Mars Attacks! (1996). One friend can rock the now legendary ALIEN mask (ACK! ACK! ACK! ACK!), while someone else could easily dress up as a Former First Lady, or even just a previous leader of the Free World.

What’s a more HILARIOUS way to go out with a bunch of dudes?? Each guy could wear a different style wig for girls, from the NATURAL to the OUTRAGEOUS. Add some loose-fitting female costumes, underneath a fake foam pregnant belly and your gaggle of buddies becomes GOO GOO GAGA!

Whether you love ’em or HATE ’em, these painted pranksters always leave an impression! Take your collective experience to its EXTREMES. Some can go as fun, kid friendly party harlequins, while the rest can check the creepy clown box! Try a hardy mix of giant jokester shoes, big bow ties and caked on makeup contrasted with the likes of Schitzo Head from Rob Zombie’s 31 (2016). Better yet, Art the Clown from Terrifier (2016), Captain Spaulding from another Zombie gem House of 1000 Corpses (2003), and DO NOT FORGET the cream of the crop, Pennywise of Stephen King’s It (1990 and 2017) fame. He’ll scare them every time!

The options here go on for decades! This one is fun and relatively easy. Whether it’s the Beatles in the late 1960’s, Duran Duran in the 80’s, or even an early ’90’s Pop Trio, awesome possibilities are out there. Go as a set of 50’s style rhythm and blues backup singers. Do Michael, Madonna, Elton AND the other Michael. The more iconic, the better!

They touched our hearts, leaving an indelible mark on POP culture history. Whether you’re young or old, you know these hilarious, retired Miamians. You could be a “family” of four gals, or guys for that matter. Dorothy, Blanche, Rose and Sophia. You cast the characters. I’d suggest according to height if you wanna get down to the nitty gritty. Get some old…… or older lady wigs and some 80’s inspired outfits (shoulder pads REQUIRED!) Now you’re off and running, or briskly power walking. Just like a legendary Golden Girl!

And when you want to go out on the town on a lighter note, take a cue from Walt Disney. Try a child friendly, clean-cut crew of classic Disney royalty. You can’t go wrong with Cinderella and her Prince Charming. Belle of the Ball and her Prince Charming, the Beast. Jasmine and Aladdin are a classic coupling that has transcended modern day class divides and cultural differences. Enter this wonderful, wonderous world with the ease of simple packaged costumes and a clever, cool looking Beast mask for Belle‘s hairy beau.

CRUELLA DEVILLE AND THE DALMATIONS

With last year’s Oscar winning revival of her life story Cruella (2021), this quintessential MAD fashion diva has been brought into a more popular, public life than ever before. A sequel is in the works, although her emblematic image is already forever branded in our brains. Her wig is eternal AND essential obviously. Its black side/white side dynamic represents a color battle that also contains a universal, underlying understanding. Add a small litter of Dalmatian dogs to the mix and you have very original, group costume couture. Simplicity’s usually best, so the people playing the pups only really need wear a manageable Dalmation mask to bring your point across the finish line.

The recent release of Top Gun: Maverick (2022) has brought Tom Cruise’s seminal role and the original 1980’s film back into our zeitgeist. And what better way to fly high with a legend than go out as a group dressed in your best, Top Gun inspired attire. Whether all male, all female, a mix of both or beyond the norms of gender identity, a simple fighter pilot packaged costume fits the bill all around. Go from simple to sexy, this traditional uniform will always be recognizable.

Celebrate classic literature and a hit modern-day Netflix show with the roaring 1920’S! This ever-popular era brings people into our store in droves! The jibing, lively flapper. The zoot suits and their stripes. It can all come together to create a magical era experience enveloped in both controversy and candor. A feathered head band for the ladies, a gangster inspired ensemble for the guy. Suddenly, you’re back in one of the ultimate Golden eras in time.

Who doesn’t love Game of Thrones (2011)?? I mean, that’s what I’ve heard on the streets. Unless you’re me and you’ve actually never seen it! Anyway, dragons seem to play a pivitol role in the long running production and it seems quite fun and fantastical to find a bunch of buddies and hit the streets dressed in the Benneton of colors that these creatures can represent. The outfitting options are certainly out there. Try a variety of styles and scales in a dragon mask. Attach a wild, colorful tail or even just a complete dragon ensemble.

Head out with your buddies looking STUDLY, even if you’re NOT traditionally that guy on a daily basis. What a better sex symbol to represent than the strong guys with the hoses?? They’re universally revered as a powerful, enticing image. This one’s appropriate, and just as HOT, with a gaggle of girls! Female firefighters are few and far between, so make a statement ladies! Shout it LOUD and PROUD, “We’re just as rough and tough as the dudes!”

An assembly of guys and women dolled up as Marvel’s GREATEST will always go over well. Besides Star Wars, it’s arguably the most recognizable franchise in Hollywood, AND within pop culture history. Black Panther and Black Widow, Iron Man, Captain America and Daredevil are only a handful of names! The list goes on……. just pick your favorite!

SNAP! SNAP! This legendary family of dark comedians will always be a favorite! Quite simply, their outfits are easy to replicate. Morticia wears a long, black wig and a skintight, flowing black dress. Gomez adorns a black and white striped suit. BUT don’t forget his perfectly perverted, John Watersesque paper thin mustache!

Wednesday, like her morbid mother, has long black hair but in her case, with ponytails. Get yourself a white, starch collared shirt and a sleeved, short black dress. Pugsley takes after his father. With a black and white stiped t-shirt and a pair of black shorts this look is complete! Granma Addams is a witch, and a grayish/white wig plus a loose-fitting black ensemble is all you’d need clothing wise. A little white face paint with some subtle black circles around the eyes, and a pair of funky looking teeth will seal this deal.

DAY OF THE DEAD

The day AFTER Halloween may be just as scary as October 31st, if not more so! This collective costume ideal is super simple and will definitely leave an impression on your audience! The easiest route to go is to get a variety of skull masks which ultimately represent a dearly departed loved one. These “sugar skulls” are the finest example of what the majority of us know as “The Day of the Dead”.

I’ve saved the most iconic for last! These characters need no further introduction. Collectively, they are probably the most recognizable creatures, and space creations known to man. AND to women too of course. Luke Skywalker, Princess Leia, Darth Maul and YES Vader. The list goes on for pages, but everyone and their mother knows the incredible world George Lucas originally created way back in 1977.

This set is guaranteed recognizable! From Captain Kirk to Spock, their uniform will always be universally understood. DON’T forget about Scotty and Uhura! The Lieutenant Commander, Geordi, can be represented simply with a pair of spaced out, angular glasses. These characters live in the lives of nerds worldwide, but their image is easily accessible to any of us.

This is a classic story that will be remembered until the end of time. Our central protagonist, Dorothy, visits the land of OZ after a devastating Kansas tornado. Here, she learns more about life in these few days than most teenagers will in the years before they turn 21!

Try different outfitted variations of Dorothy. There’s the simple, Kansas Sweetie and also a Storybook OZ version of her. The Witch is ESSENTIAL to this group dynamic. And a flock of her Evil Winged Monkeys will only add to her nasty presence.

Glinda the Good Witch is saved as the best for last. Her lavish Princess inspired couture will sprinkle an incredibly magical essence onto a genus of legends you and your friends will be proud to prowl around as!