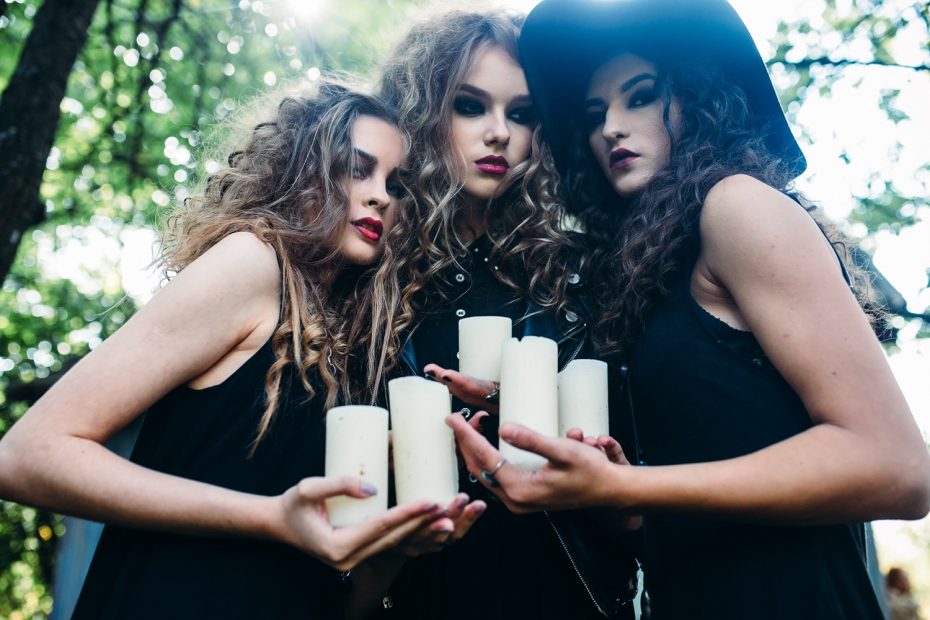 They are the eternal epitome of feminine evil. But sometimes they’re just a sweet teen or young adult who was put upon by a certain, magical gift. The myriad of representations of Witches in Hollywood are varied and always fun! Macabre or otherwise… From the horrific to the hilarious, here’s a Witch’s brew representing the best of the BEST!

She is a loyal member of Voldemort’s inner circle. Two-time Academy Award nominee, actress Helena Bonham Carter played her as a demented, and certifiable witch who is highly intelligent and unusually skilled in the black arts. And eventually proves herself more capable than her superior Voldemort. She even grows past the powers of other people within the Harry Potter world. She enjoys torture, a trait far beyond what a character from a Children’s book should exemplify!

She is super happy when she murders her own cousin, Sirus Black. She’s a nasty witch and unusually uncomfortable to be around. Watch out for Bellatrix Lestrange! She doesn’t mess around.

ALEX, JANE, AND SUKIE (THE WITCHES OF EASTWICKE)

They were some of the top female stars of the 1980’s. Cher, Michele Pfeiffer, and Susan Sarandon. In this Massachusetts, small-town based “romantic” comedy, they all had extreme powers. And when The Devil shows up in the guise of Jack Nicholson, they each have the chance to be seduced by the Man from Below.

It was a rom-com with scenes distributed amongst three essential premises. There are single, play-like scenarios for each of these Hollywood witchy actresses. One by one, they attempt to dissuade Jack the Devil’s sorcery and Come Ons, but at times they fall prey to his talents. This is a classic ’80’s flick with a few beautiful actresses ready to shine in their spotlight above a seasoned actor like Nicholson.

Poor, UNFORTUNATE SOULS! She made the bed with the 1990’s vision of the Disney Witch. She’s selfish, awful and determined to become beautiful! When Ariel, The Little Mermaid, visits her she thinks she’s finally found her way out of Witch Dom.

She promises Ariel a full life above the Ocean world. She’s a control freak, offering the best for her client but only when she knows she can gain something essential in return. If Ariel doesn’t win the prince’s affection, she is Ursula’s personal servant forever! Case in Point– don’t ever trust anyone with electric eels as assistants!

She has become a Cult legend. And not just Bette Midler! Along with her devious cohorts Sarah Jessica Parker and Kathy Najimy, these angry witches have been stalking the children of Salem, Massachusetts for decades. When they’re finally released from their seemingly eternal shut-out, they are the ladies of Halloween night once again!

Hocus Pocus (1993) is a perfect scary movie for kids! The Sanderson sisters are funny, ferocious, and hungry. But it always stays PG rated. They are some of the most popular witch costumes at Halloween time, and their resonance continues on with a sequel, finally, being released this year just in time for the spooky season!

THE GRAND HIGH WITCH (THE WITCHES)

When I was 12 years old, I made my older sister take me to this awesome feast of a movie! She was reluctant, rolling her eyes at my strange request. But when the fiasco ended, she’d been hypnotized by the greatest movie about Witches of ALL TIME!

Oscar Winner Angelica Huston plays the Grand High Witch. A gnarled, disgusting wench whose face is covered when in the outside world by a mask of beautiful feminine normalcy. Huston plays the evilest of the EVIL! She is a bitch hell bent on poisoning every child in England with a potion that when consumed will turn them into mice. Genius!

Roald Dahl’s book is just one of the “gems” he wrote while emotionally and physically abusing his own children. And that’s a whole other story in and of itself. I personally met his daughter Sophie years ago, and the stories she told me about him were… nuts to say the least. He was a master at writing some of the strangest examples of child abuse that overshadowed the likes of child killing works by The Grimm Brothers and beyond. But he managed to make them entertaining, and most of us have clearly overlooked the underlying supreme darkness they represent. So weird, I LOVE IT!

When Angelica Huston pulls her rubber human face off at the Convention for the Prevention of Cruelty to Children… it’s indescribable! She’s a monster only Jim Hensen could have invented. And HE DID! Sadly, and thankfully, right before he died. Again, genius. I will never get over this movie. The Witches (1993) is a darkly entertaining, completely remarkable children’s story.

Also, avoid the recent remake with Anne Hathaway as the Grand High Witch. Angelica Huston’s performance and the puppets involved have everything against Hathaway! I don’t care what anyone says, puppets beat CGI any day!

THE WICKED WITCH OF THE WEST (THE WIZARD OF OZ)

She’s the OG of the witching world. Hell bent on avenging the death of her sister. Her masochistic demeanor landed her the spot as the first Green Goblin! With her flying winged monkeys and spells galore, actress Margaret Hamilton was regrettably denied an Oscar nomination for her fiery performance as the first of its kind. She is evil without contention and leads the film to the scarier side. From poppy drugs to shoes, this bitch is out for vengeance! When John Waters was a kid, he’d run around his family home dressed up like the sorceress, green face and all! She’s apparently an up-and-coming genius homosexual’s dream come true! Lovely.

Another classic for the cult of the ’90’s. She’s smart as a whip and loves her gift. Nancy introduces newcomer Robin Tunney to a world beyond her imagination. Downs recognizes Sarah’s (Tunney) gift and puts the spells into full throttle.

At first the gift is good, bringing friends’ misfortunes into turn around. But they suddenly become bleak, as Nancy’s powers become more interested in the dark side of stuff. Sarah is eventually in the desperate position to save the world from what could become the next Armageddon. This movie defined a generation in the 1990’s and holds strong to this day. A Classic!

She can alter reality in the strangest manner and is a Superhero Sorceress. She became the wifey of fellow Super God Vision. They had two sons together, Thomas and William. But what a lame way to depict such a powerful woman, by the children she bares.

She was initially a Supervillain along with her twin brother, Pietro Maximoff aka Quicksilver. She has since been seen as a prominent member of the West Coast Avengers and Force Works Teams. When she married the robot Vision, they produced their genetically engineered boys.

It’s so cool that young Elizabeth Olsen portrayed the character in subsequent MARVEL studio films. She is an actress of the highest caliber, and her Oscar is definitely on the way! Remember, she’s the girl from Silent House (2011)! She carried that scary movie through ONE 90-minute nonstop shot! That in and of itself is completely incredible. And only true talent and patience can do something like that. Especially if you’re a teenage girl. True Props to Elizabeth Olsen. I’ve always been a huge fan of hers.

They are The Charmed Ones. And although this hit TV show originally aired on the WB back in the 1990’s, it still went through years of changes and temperamental actresses. But it’s a certifiable Cult Classic!

Created by Constance M. Burge, the sisters in discussion each possess a very different magical power. These girls try to maintain normal lives in Modern-day San Francisco, but it’s not as easy as it seems! Shannon Doherty, Holly Marie Combs, and Alyssa Milano were the first to grace the small screen UNTIL their long-lost sister, played by Rose McGowen, suddenly appears! She takes the fourth place within “Their Power of Three”. It’s like the Gilmore Girls with Witches… A trend fabulously popular at a Network like the early WB Channel!

Create by Josh Whedon, this one-of-a-kind girl was portrayed by the uber talented comedic actress Alyson Hannigan. Prior to How I Met Your Mother (2005-14) and American Pie (1999), she played a very essential role in the Scooby Gang on Buffy the Vampire Slayer (1997-2003). In Sunnydale, she’s the shit. A nerd with a shy disposition that overlooks her underlying actual powers as a Witch!

She’s a very complex character in fact. Full of powers beyond an audience’s imagination! Teenagers who watched Buffy instantly connected with this misfit Witch right away. She became one of the most sought-after supporting players and will live on as a Witch Buffy could always depend upon.

She’s a very powerful Witch and one of the lead characters on this hit Television series. She’s actually quite heroic as well. She’s sweet, helpful, and kind of entirely selfless. She is a martyr ready to sacrifice her own self in order to save her friends and family. She’s hands down a stand-up gal.

Her Powers became too much for her though, eventually killing her off the Show. She was consistently kind though. A Witch with an Eternal Heart of Gold.

You can’t think of the ’90’s without Melissa Joan Hart as one of the most celebrated teenage dreams in History! Although, the character was actually created in October 1962 by artist and writer Dan Decarlo for Archie Comics. Sabrina’s two Aunts, Hilda and Zelda, brought her to fruition with the flick of a spell! It wasn’t until 1996 that Sabrina truly took flight.

She is a sweetheart who actually secretly uses her gifts to help those around her. All the people she cares about. Salem, her loud-mouthed Cat, is a genuine sidekick. Yet, he’s someone trapped inside the wrong body in the aftermath of a long overdue curse. Welcome to the World of Teenage Witches!

Two-time Academy Award Winner Jessica Lange has been a regular on this series since the beginning. There’s no doubt she made it a much more entertaining franchise. As a coke head Sorceress, she fills the bill and so much more!

Born to Endora and Maurice, right around 400 Years Ago, Samantha is the perfect suburban housewife. With two kids and a dog, she couldn’t be living a more normal existence. Except that she’s a Witch! And the most popular, recognizable Witch TV History has ever seen!

She yearned for the loss of her powers, but everyday Suburban existence calls for something special. A niche gift to make the mundane issues of day-to-day life… disappear! She attempts to solve the modern-day housewife issues on a “mortal” level, but the temptation becomes too alluring again. Welcome back to the World of Witchcraft Samantha!