Home » How To Shuffle Cards Like A Pro: Styles & Techniques

How To Shuffle Cards Like A Pro: Styles & Techniques 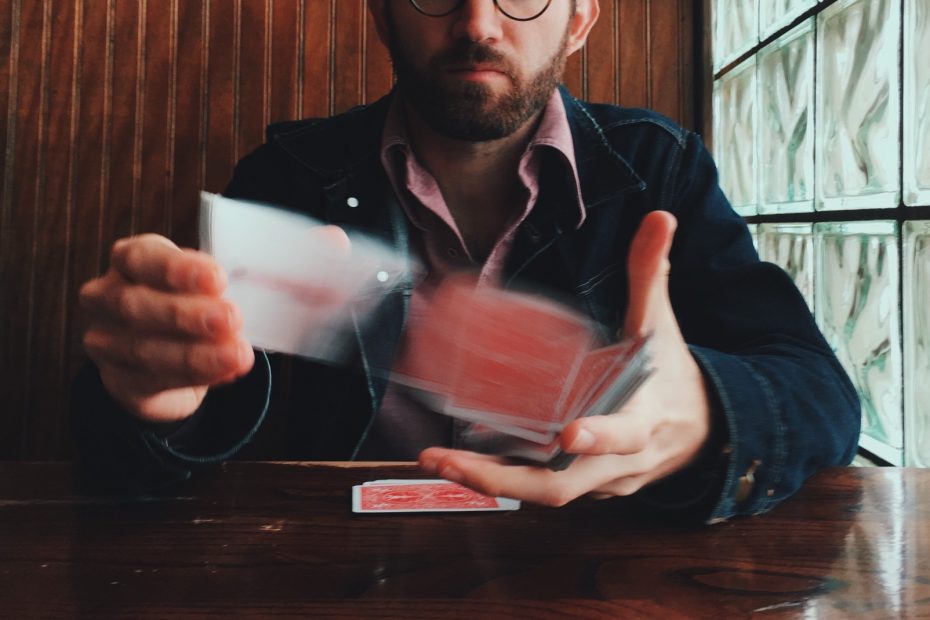 Whether you want to be a master card magician or play poker like a pro, you need to know how to properly shuffle a deck. Though this goes beyond simply randomizing some cards. Especially if you want to practice the subtle art of card magic.

It helps to know not just how to manipulate the cards, but you also need to do so with more than a little dramatic flair. Not to mention the cool-handed confidence to control the flow of the cards like a pro.

If you’re new to the art and science of shuffling like a pro, you might be surprised to hear that there are a few different styles and techniques to consider. Some are relatively easy and will just randomize a bunch of cards. Whereas others are advanced and give you the sophisticated skills of a true card mechanic.

When you stop to think about it, there are a lot of card magic effects that start out with the magician handing a spectator a deck of cards, and then asking them to shuffle their selected card into the deck. A lot of the time the spectator makes a fool of themselves because they can’t do a simple card shuffle. The magician needs to take over and takes control of the cards as they see fit.

If you’re looking to take your shuffling skills to the next level, or you just want to add some new techniques to your bag of tricks, you might want to explore some of the following card shuffling styles and techniques.

This is the easiest shuffling style and the one that arguably does the worst job of randomizing a deck of cards. The Overhand Shuffle is the first thing kids learn when messing around with a deck of cards. Though it’s still so commonly known that a spectator will accept it as a viable shuffling technique, which means you can use it for magical performance purposes.

It starts with the deck of cards being placed face-down in one hand. Then you use the thumb of your other hand to carefully peel off small batches of cards. You place them over the top so that they fall one at a time into that other hand until you’ve gone through the entire deck lightly randomized.

The nice thing about the overhand shuffle is that once you become skilled at it, you can perform it very rapidly. This lends to some advanced sleight of hand techniques to help you better control individual cards within a gimmicked or gaffed deck.

The Riffle Shuffle or Dovetail Shuffle is a classic card player shuffling technique. This is what you see at blackjack tables in a casino. When it’s done correctly the riffle shuffle prevents any of the cards from being accidentally exposed. This means it specifically doesn’t allow the same kind of sleight of hand techniques that shady dealers try to get away with.

The Riffle Shuffle starts by first splitting the deck into two relatively equal halves. The dealer then puts one half in each hand.

At this point, the dealer mirrors the actions of both hands, as they bring the packets together. Then they slowly riffle up the side of each packet simultaneously with their thumbs.

Ideally, the corners of the cards overlap when doing this. This lets them smoothly weave into each other. At that point, the dealer can then push them into each other once they are done.

On the face of it, the Riffle Shuffle looks very crisp and professional. Though there are ways for card magicians to adjust it. An experienced card mechanic can take advantage once the cards are woven together along one short edge. They can then be bent by your thumbs, to let them spring together in a move usually described as the “Bridge.”

Similar to the riffle shuffle, the Blackjack shuffle is another shuffling style you see being used by professional dealers. With a practiced hand, the blackjack shuffle minimizes the wear and tear on the cards. This can come in handy for card magicians who need to practice their craft to perfection. It also helps preserve your performance decks. It’s also a great shuffling style to master for times when you want to host a poker night with your friends, as it demonstrated shuffle proficiency.

There isn’t a lot of card bending with the blackjack shuffle. Yet it does take a fair amount of practice to master to get it to look like you’re barely moving the cards at all.

It starts by squaring the deck of cards into a neat stack. You then cut the deck into two crisp stacks that are roughly equal in size. Then you place the two stacks horizontally in front of you, with the two inside and bottom corners pointing toward you.

With the two even stacks ready, you place your thumbs against those two corners, with your index fingers lightly touching the opposite corners. Maintaining a tight grip on the two stacks with the rest of your fingers, you use your thumbs to draw the corners upward.

Then deftly draw the two halves of the deck closer together, before letting the cards fall just like you would do with the riffle shuffle. Except you use the small corner of the deck to push the interconnected cards back together, square the deck, and repeat.

As the name implies the Hindu Shuffle looks a little exotic to Westerners, as it’s a more common shuffling style in Central and Eastern Asia. In a lot of ways, the mechanics are similar to the overhand shuffle. However, the cards move along the direction of their long edges rather than parallel to their short edges.

The Hindu Shuffle involves taking packets from the top of the deck, which you do by grabbing them with your thumb along one long edge and a couple of fingers along the other long edge. The dealer then carefully peels the groups of cards from the top of the deck, which is held in the other hand. They then fall into the hand the dealer is using with their thumb and fingers for grabbing the packets.

Sometimes known as “Running Cuts” the strip shuffle is another shuffling style used by card magicians and professional dealers along. When done correctly you take specific sections of the deck, put them down, then place the other half on top. Then you repeat this motion multiple times to randomize or set the deck for a trick. It looks a little bit like the overhand shuffle but has much more nuance to it.

It starts by placing the deck facedown in front of you with the cards lengthwise. Then with the thumbs on both hands, grasp the side of the deck that’s closest to you and use your fingers to slightly elevate the left side of the deck.

The small section of cards is then placed back into the deck in a different location. This might be the middle, the bottom, the top, or anywhere you need it to be for your performance.

If you’re going to use this shuffling style for playing poker or dealing blackjack at a friendly poker night table, you would carry on. This includes squaring the deck and repeating another four or five times working with a different section of the deck. Until everyone in the room is confident that you’re not stacking the deck in your favor.

The Faro Shuffle starts by dividing the deck into two relatively equal halves. The dealer then holds one half in each hand before bringing the two halves back together. This portion of the shuffle lends itself to dramatic flair.

As the two halves of the deck start to come together, they make contact at one corner. The dealer then uses some pressure to push them together in such a way that the cards weave together perfectly.

The trick here is to not “Jam” the cards together. Instead, you need to develop a feel for how to do this so that the cards will slide into each other smoothly just like a zipper, precisely one by one.