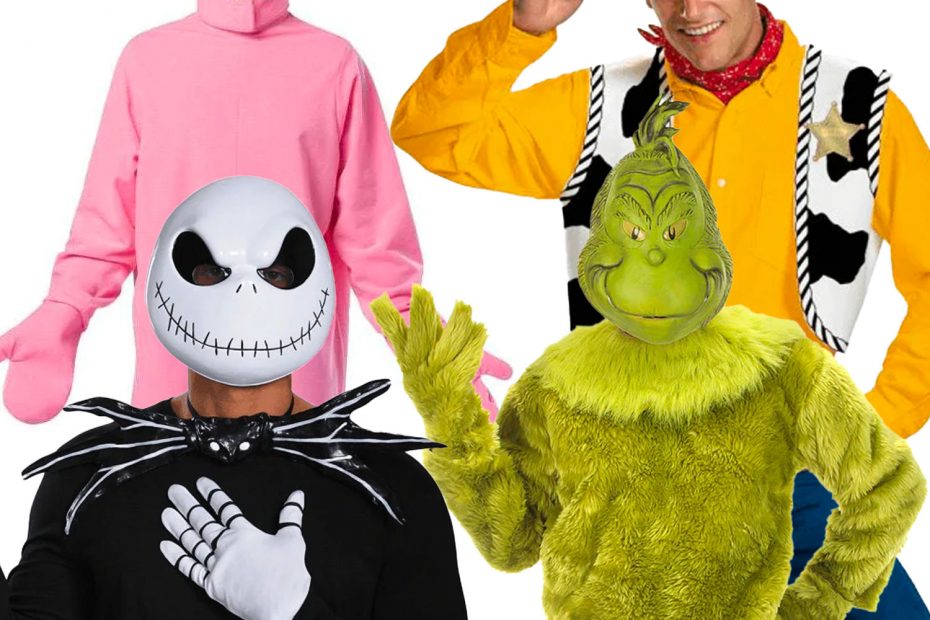 It’s the MOST WONDERFUL TIME OF THE YEAR! Full of wonder, whimsy, and sometimes weirdness. Certain people even celebrate the season year ’round. The HALLMARK CHANNEL dedicates it’s entire July programming to Christmas! Whether die-hard or simply seasonal, yuletide cheer is a hankering that hits the best of us. And St. Nick and his assorted associates always make memorable ensembles. Here is a selection of notable, sometimes overlooked, costumes for the Holiday Season.

Whether you’re tall or short, boy, girl or trans, the Elf is one of the most traditional representations of Christmas. Think Buddy from the hit flick Elf (2003). A 6- foot adult man in the run-of-the-mill, green-themed frock is HILARIOUS in and of itself!

OR go ghoulish! Try the customary get-up but add a MONSTROUS elfish mask to give yourself an edge! It’s perfect for kids as well. Young or old, an Elf is an Elf is an Elf…..

The Nightmare Before Christmas

They are now classic, modern- day characters that represent both the light and darker sides of Noel. Jack, King of Halloweentown, is the boney, bored protagonist. Sally is his stitched together muse. They are a pair of freaky-looking misfits that ultimately incur a sense of Yuletide anyway. And don’t forget about The Oogie Boogie Man, Lock Shock and Barrel, and of course Jack’s side piece Zero!

Clark and Ellen Griswold. Or as Clark’s horrible boss so emphatically calls them, the “Greaseballs”. Their outfits are traditional and conservative. And when perfectly placed together, the attire is guaranteed to create a sense of nostalgia and humor around the pair representing them. These adorable Chicago suburbanites are simple. Clark with his button- down shirt and playful Christmas themed tie. An oversized wool Cardigan and of course the Santa Hat! Ellen is equally uncomplicated: White collared shirt, long blond wig and a cheerful skirt to finish off the look. They are a Christmas couple costume made in Heaven!

Aunt Bethany and Uncle Lewis are Holiday Icons as well, in their own right. Bethany with her kitschy, camped up faux leopard fur, giant fake pearls and that sweet little hat with the red bow. Don’t forget the bright rouge on your cheeks, and the cherry color old lady lipstick. Lewis is simply classic. The poorly fitting gray toupee. A boxy old man suit and, of course, THE STOGIE! Add a touch of HYSTERICAL detail by burning the back of the elderly guy’s jacket!

Cousin Eddie, played for THE SECOND TIME with a comedic timing worthy of Oscar buzz by Randy Quad, is quite possibly the most definitive personality from the bunch! The Trooper Hat with its furry flaps. The open White Robe concealing his privacy by only a loose fitting belt. It’s simplicity at Comedy’s best! “You serious about that Clark?”

This Holiday Classic represents a 1940’s America with incredible pre-war apparel. You should instantly think of the Pink Bunny Rabbit pajamas Ralphie‘s insensitive Aunt puts under the tree for him. It’s a definite turn off for any red- blooded boy who just wants a Red Ryder BB Gun for Christmas!

Contemplate the “Major Award” Dad receives: You could adorn a cardboard box with the word FRAGILE written across the front. Even little brother Randy had a memorable get-up. First, get yourself a blow up, fatty suit. Disguise it with a giant winter coat, some heavy- duty snow pants, a hat, and you have the memorably ridiculous scene where he and his unraveled mother attempt to get him ready for school on a cold winter morning.

He’s the Demon of the Season. And you’d BETTER WATCH OUT! This horror film from 2011 is the story of a boy who accidently summons a monstrosity into his family’s home on the eve of Christmas. Krampus’s High Horns reach to the Heavens, and his anti-yuletide attitude is the cause of some Holiday madness and A LOT of PG-13 rated hilarity! You could put this madness together, but the quickest way to pull off the Krampus look is by placing yourself in the FULL hoven footed creature’s Costume.

What better way to celebrate the season than with a costume that represents the reason for the Season?! No, I’m not talking about Jesus or The Virgin Mary. I’m speaking exclusively about PRESENTS! And who doesn’t LOVE a gift or two. Or three or four…. This category could go many ways.

Think of some of our modern-day diminutive friends. A perfect example being Barbie (actually set to have her OWN live action film starring Margot Robie). Then there are the popular creations from the imaginations of the peeps at PIXAR. The original Toy Story (1995) eventually spawned three sequels and a massive fan following. Jessie, Woody, and Buzz Lightyear ALL make the list of vital contemporary Christmas toy costuming.

Go more traditional maybe! A Wooden Toy Soldier. A Ginger Bread Man or a glorious Christmas Angel you’d be proud to put on top of your Tree!

Don’t forget that your favorite, freaky furry monsters were hatched right around the Holidays! Gremlins (1985) was a Christmas movie on crack! And has become a classic to boot. Dress up as sweet, innocent Gizmo. Or go a little more grotesque with a Stripe mask! How can anyone forget this unapologetic leader of the green rebel offspring?! Either way, your incarnation is certain to incur uproarious reminiscence.

He’s brass, he’s crass, and he LOOOOVES ass! He’s Santa Claus! Well, Billy Bob Thornton’s elicit, explicit version of the Fat Bearded Man at least! All this outfit would take is a simple Santa suit. But don’t forget to dirty it up before heading out. Willie’s extreme lack of class and personal hygiene is essential! Grab a half-drunk bottle of whiskey and a shorter friend to suit-up uncomfortably as his criminal Elf sidekick. You’ve got the look down.

His Christmas Special is arguably one of the most popular in television history. He’s the depressed curmudgeon who watches the world pass him by with a cynicism that transcends that of an average 10-year-old boy. His yellow t-shirt, with its squiggly black line across the bottom, is iconic. And for “The Christmas Special” look, a simple brown train conductor’s cap and a pair of loafers will get it done! BUT– don’t forget his exaggerated eyebrows, and OF COURSE the definitive, and some would say pathetic, Christmas tree this archetypal kid falls madly in love with!

This is a three- dimensional depiction of the Nativity. It includes the Holy Family, the Angels, the Magi, the Ox, the Donkey, and of course the Shepherds. With various villagers sprinkled around in there. Each Christian character is a representation of the religious tradition adored by people all over the world. The Gospel of Luke in particular describes these singular depictions. As a whole this elaborate example of Holiday costuming would be recognized by the public in spades!

This unusually outlandish world is responsible for our introduction to Stop-Motion Animation. A lot of the images even inspired writer David Berenbaum when he was envisioning Buddy’s wacky North Pole friends in Elf (2003). Bumble Yeti is a stand-out! He is the mythical Abominable Snowman from Frosty the Snowman (1969). AND Rudolph held his own as the misfit who ended up leading Santa’s sleigh to ultimate success!

Jack Frost is a beautiful example of child simplicity. The Winter Warlock from Santa Claus is Coming to Town (1970) could be put together with the eternal white beard, a wizard hat, and long robe. The Heat Miser from The Year Without Santa Claus (1974) is easy with a FLAMING red and orange troll wig and a BRIGHT RED Rudolph nose. Just remember to cover your face with an AWFUL SCOUL!

Die Hard (1988) is arguably the most controversial Christmas movie of all time. IS IT or ISN’T IT?! Here at Abracadabra NYC, we say YES! 100%! The lead protagonist, played by Bruce Willis, is legendary in his sense of urgency and heroic demeanor. He’s dirty and unkempt with a simple white wife beater and a pair of ratty pants. A gun would only add to the ensemble, but in this day and age that’s an accessory you’d really have to consider…….. A substitution could be simply a gun HOLSTER around your left shoulder. And don’t forget the police badge to top it off!

This tale has been produced by Hollywood over and over again for decades. From The Muppet Christmas Carol (1992) with Oscar Winner Michael Caine as the crotchety old geezer, to Oscar Winner George C. Scott in the more traditional A Christmas Carol (1984), this diegesis has been told many times in many ways. But the globally known storyline and its ultimate human life lesson will forever remain exactly the same. My personal favorite rendition though is the Bill Murray vehicle Scrooged (1988), in which the SNL alum brings the miserly penny-pincher to a then “modern-day” Manhattan.

The costumes in this case are contrasts. Scrooge sports a simple night shirt, old time sleeping cap and a cane. And then you have the traditional Christmas Caroler. The three visiting Ghosts can go many directions. The Present is traditionally a long, colorful, flowing robe and a high set Crown on top of the head. The Past could be an Angel, with giant white wings, a bright blond wig, and magic wand. The Future, is on the other hand, is much darker. The perfect idea is a torn up Grim Reaper robe, and an intimidatingly long scythe. All in all, their guise is relatively broad, and open for interpretation. From the wicked to a more subtle approach.

Ebeneezer’s deceased partner, Jacob Marly, would make a ghoulish composite. He wears a ratty, old suit. And of course you have to include the links and layers of jangling chains to finish it off.

They are quite simply The Legends of Christmas! The epitome of the season. Every country and culture around the world has their own depiction of the present-totting Prince and his loyal wife. Never hesitate dressing as this iconic Christmas duo!

He’s a mean one, he really is a heel! As cuddly as a cactus, as charming as an eel. Mr. Grinch you’re a bad banana, with the greasy black peel. Words have never been SO sweetly sardonic when describing a Christmas character we all LOVE to HATE! He is Universal and arguably the most recognizable Holiday persona in History (well…. besides the Big Guy in Red!) He’s rude and crude, but ultimately becomes someone with a heart that grows TWO sizes too big.