Scariest Horror Movies of All Time 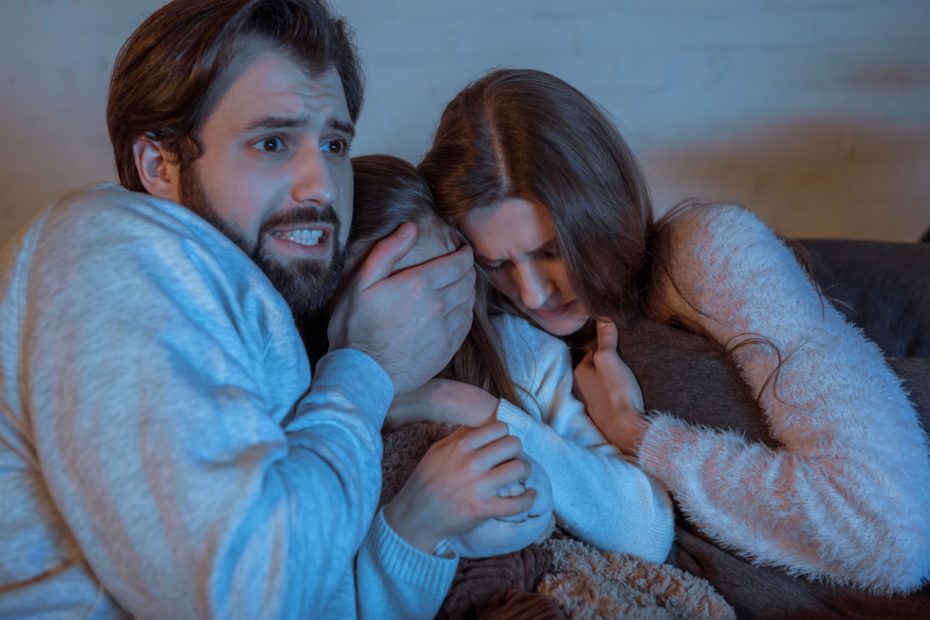 The Halloween experience should be filled with the movies that freak us out the most. Some titles bring Chills Down Our Spines. Others make you think about the State of the World in general. Fright is a feeling all-encompassing. Something everyone can relate to. Some of us can’t stand it– others flock to it!

The litany of Scary Movies out there is ever reaching. From the Independents to the Major Studios, horror has always had a place in our disturbed hearts and minds. Here is a LIST of the Classics, modern and post-modern, that scare the SH!$ out of US!

Australian born actress Toni Collette was robbed of her 2nd Academy Award nomination for her gripping performance as a woman whose mother has just passed away. She has a seemingly lovely family, and a very unusual hobby of building miniature “doll houses” based on her life. Things get weird though as her husband and children are welcomed into the dark world she has ultimately inherited.

Again, Collette is mesmerizing in this film. From love to breakdowns, she proves over and over again what an exceptional actress she has become. Or always was…

It’s not the house that’s haunted… it’s their son! An extremely original premise brought again by one of Horror’s Modern Masters, James Wan. It has plenty of jump-scares, but also the acting is incredible! With the likes of Rose Byrne (otherwise known for her comedic force), and Patrick Wilson as the confused Father. And then there’s the Finale…

Based on the Japanese film RINGU (1998), this movie rocked the seats of cineplexes across America. And of course, sequels followed. It made a star out of actress Naomi Watts. Another Aussie! She plays a journalist hell-bent on figuring out why her niece and friends died after viewing a videotape. Watts’s character becomes a ticking time bomb as she looks into the deaths, before her own number is up.

This classic is ALL the genius of George Romero. Made entirely in his hometown of Pittsburgh, Pennsylvania (I grew up there!), this low budget Fright Fest introduced us to the world of Zombies! It’s ghoulish and gruesome in black and white, and they filmed the graveyard scenes in the same Cemetery where my Dad is buried! That’s cool, and definitely deep. RIP Dad.

Jordan Peele’s follow up to his Oscar winning Get Out (2017) is arguably far superior to its predecessor. Questions abound in this horror/drama about a nice black family trapped inside their darker sides. Oscar Winner Lupita Nyong’o gives another stellar performance as a mother struggling between two personas. It’s funny, and heavy. The scare factor is 100%! It’s better than Get Out. Ya, I said it! Jordan Peele is finding his way in the genre… hopefully… please ignore his Candyman (2021) remake! Shame. But speaking of Candyman…

This is one of the most terrifying movies of the ’90’s. Without a doubt, it impacted audiences and the mirrors they use. Helen Lyle (Virginia Madsen) is a Grad student writing a thesis on urban myths, and their effects on modern inner-city communities. She is a strong-willed woman, with balls of steel. She amerces herself further and further into a world she may never be able to come back from.

Director Bernard Rose’s film, based loosely on Clive Barker’s short story The Forbidden, is quite simply a work of Auteur genius. Rose took the simple Barker tale and transformed it into a revolutionary horror film. OH– and it’s Scary as Hell!

This remake of the Japanese flick is directed by the same auteur behind the original. And even though it’s rated just PG-13, it still packs a punch. People crawl around upside down on the ceiling, and Sarah Michele Gellar learns that sometimes traveling outside of the country is a BAD idea.

It’s one of the most original horror concepts ever conceived, and also the biggest sequel spawner in Horror history! The first shows two men as they wake up in a dank bathroom. There’s a dead body between them. They’re both chained to a wall. What the audience doesn’t know is that the whole thing is part of a horrifying trick.

This tiny budget gem not only far surpassed any Hollywood Executive’s financial expectations, but it also created a franchise that churned out the next, after the next, after the next sequel every Halloween Season to follow! It also solidified James Wan’s reputation as one of the most influential horror directors of his generation.

“I’m Chucky! Wanna Play?!” After Serial Murderer Charles Lee Ray spiritually places his soul into the body of a plastic Good Guy Doll, all Hell breaks loose! This Classic has spawned Sequel after sequel after sequel. Interestingly, they have all been written by Don Mancini. Chucky’s creator.

Personally, I’m not scared of sticks and stones. I remember seeing this “Classic” in the theater with a room full of amateurs. This overrated indie follows a group of film students into the Maryland woods to search out the Blair Witch. The flick goes on to show a lot of crying, sticks and stones, and some unneeded snot shots. It’s ridiculous. And if you’re shocked by its plain jane attempts at horror, you are not a real horror fan. No offense!

But audiences loved it! It made $250 million dollars at the box office. I remember being 16, sitting in the auditorium, thinking, “What?!” It’s as scary as Paranormal Activity (2007), which isn’t saying much! But I have to list it because of the popular consensus. I do understand its originality for the time. But it’s also responsible for spawning a mass of rip offs and inventing the annoying FOUND FOOTAGE horror genre.

The late director Tobe Hooper originally saw this genre game changer as just a very black comedy. A lot of horror auteurs have said the same thing about their legendary works in fact. But it flipped Horror on its ass! Leatherface is one of the most recognizable serial savages in Film History. Even if Hooper only intended on a silly story about stupid, drug addled teenagers and the mirthless misfits they unfortunately encounter, he still came out with a Cult Classic that Terrifies!

What a traumatizingly Good Time this Work of Art is! Released in the midst of ’80’s VHS madness, the cover alone is shocking: A pale man, pins jetting out of his bald white head, holding an intricate Chinese pleasure box. A sinister smile over his face.

Clive Barker’s directorial debut introduced us to the Cenobites, Pin Head, and murderous domesticity. As a gay kid in the suburbs, when I saw it the first time, I knew there was something unusual I related to with Barker. He got murderous women on a similar level to me. Then I found out he was gay! And everything made sense… Gay guys LOVE crazy women! Especially when they’re wearing shoulder padded shirts and wield a hammer!

The monsters in this film were completely original, then John Krasinski came along. He and his writers copied the idea and called it their own! In the first vision, they are blind cave dwellers who hunt only by their sense of hearing. And when a group of female cave divers show up, dinner is served!

A young boy is literally the antichrist. Coincidence after murderous coincidence brings his true nature finally to the light. This Classic spawned a litany of Copycats throughout the 1980’s. But none of them held a candle to the fear invoked by little Damien Thorne.

It goes without saying, most of us are terrified of our nightmares. I enjoy them. But that’s a conversation for a therapist. What if your parents were responsible for burning alive a pedophile murderer and then he comes back to seek revenge?! In your Nightmares!

It sounds fun to me, but I’m dark and unafraid of death. The idea in general is shocking! And it’s a wonder it took Wes Craven a decade to find someone in Hollywood that would produce his masterpiece. It has its flaws… but deep down it is raw, sinister, and with a black sense of humor that ultimately propelled Freddy to Global Stardom.

Freddy Kreuger’s scary, but he’s also strangely relatable. He wants to avenge what’s been taken away from him. He is the ultimate Movie Monster. Frankenstein, Dracula, and Freddy. Thank you, Wes Craven! You made Horror History.

Another popular example that I personally never understood. Even after the creator himself Stephen King saw the finished product, he hated it! But its popularity among filmdom is undeniable. All work and no lay makes Jack a dull boy. It also makes him very angry especially towards his own family. The action takes place at the Overlook Hotel when Jack and his family are staying for a long weekend.

Alfred Hitchcock’s horror classic was the first of its kind. My mom told me all about the impact it had on popular culture when she was a teenage girl. After stealing $40,000, the star Janet Leigh finds a hide-a-away at the Bate Motel. It’s run a young man, Norman Bates, who’s a mama’s boy to say the least. It was completely shocking for its time. Hitchcock even killed off his leading lady in the first half hour of the movie. What?! Unheard of! And taking a shower will never be the same again…

Only three movies have ever Won the Top Five Oscars at the Academy Awards in history. The Silence of the Lambs was one of them. And it’s a Horror movie! Jodie Foster (Best Actress), Anthony Hopkins (Best Actor), Jonathan Demme (Best Director), Ted Tally (Best Adapted Screenplay), and Best Picture.

This is a movie that defies boundaries but understands limits. It’s horrific to a point, but fortunately helmed by a director that knew what general audiences could accept. My favorite movie of all time. It’s quite simply a Masterpiece. And the Scariest Movie of all Time!