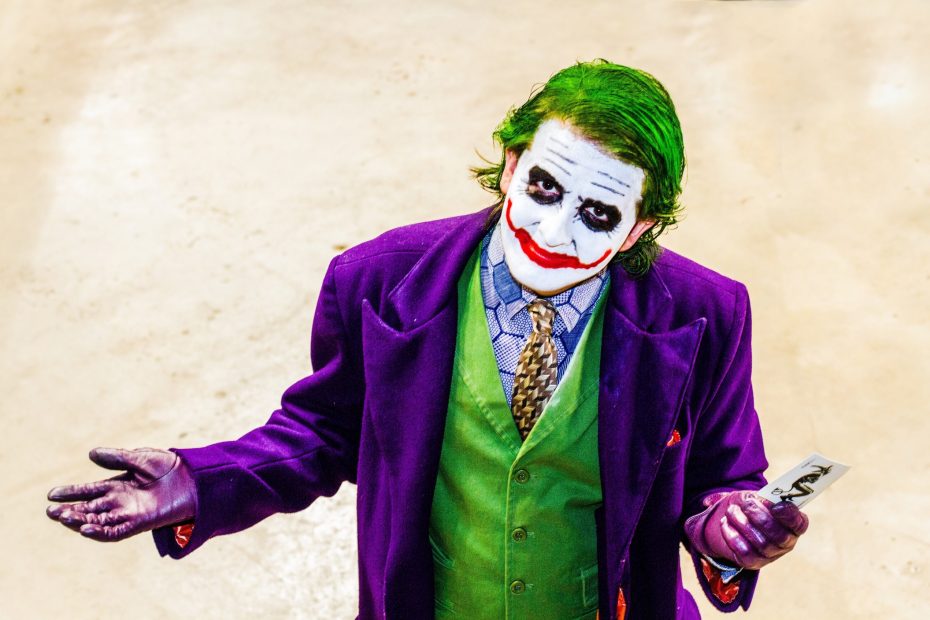 Batman costumes are one of the most popular costumes we carry year after year. The Dark Knight is one of the most revered Super Heros in pop culture history. He’s a vigilante, a loner, and an advocate of justice. His back story is complex and intense. Yet what makes the Big Black Bat most intriguing are the freaks, weirdos and misfits he works so hard at bringing down. The Bat Man has always been a character of few words. His villainous counterparts are quite the opposite, with personalities running to the extreme. Here are some of our favorites:

In the fall of 1941, Bill Finger and Bob Kane first introduced Vincent Kartheiser, aka Dr. Jonathan Crane, aka Scarecrow to the world of Comic books. His skinny frame and villainous name were said to be inspired by the Ichabod Crane character from the historical horror fable, “The Legend of Sleepy Hollow.”

In the 1960’s DC Comic writers began bringing him into more stories, vitalizing his presence as a recurring antihero. His cartoon life continued beyond that as well. The Emmy winning Batman: The Animated Series (1992) explored his nasty visions of psychiatry. And he was voiced by none other than horror icon Jeffrey Combs (Re-Animator, 1985).

Jonathan Crane is a psychotherapist of sorts with a knack for creating hallucinations and confusion in his “patients”. In Batman Begins (2005), actor Cillian Murphy plays him as an apocalyptic nightmare. He is a fierce nemesis who, deep down, quite fears the Batman.

He is an inventor with a genius level intellect. He was first introduced to the DC world by artist Sheldon Moldoff in February 1959 with the name Mr. Zero. His “real” name though is Dr. Victor Fries. Once a cryogenics specialist in Gotham City, he was officially transformed into Mr. Freeze after a botched attempt at relieving his wife of a chronic illness. The risky endeavor left his own body trapped at a sub-zero temperature. Hence his elaborate cryogenic costume.

History has proven Mr. Freeze to be a popular enemy of Batman’s among Batfans. He is one of the most used nemeses of the Caped Crusader and holds a spot within the collection of criminals that make up Batman’s rogue gallery.

And who can forget Arnold Schwarzenegger’s hilarious portrayal of the ice-blue scientist in the hilariously forgettable 1997 flop Batman and Robin? Truth be told, Mr. Freeze is an adversary worthy of far more than Joel Schumacher’s film debacle. He could be a 3-dimensial monster with good intentions resulting in really bad outcomes.

Considered to be Batman’s second arch-nemesis, in line behind Joker, his original name was Harvey Kent. This was later changed to Harvey Dent for an unspecified writer’s reasoning. He was an abused child who in adulthood would succumb to issues of bipolarism and schizophrenia. These attributes were later exploited by acid to the face and accusations of distrust by Commissioner Gordan and The Batman.

With the flip of a coin, Harvey Dent (aka Two Face) tries to define fate. He’s a simpler opponent, in the sense that he isn’t going out of his way to destroy The Dark Knight. His double-sided face reflects his double- sided coinage. A man lost in a monster. Or is he a monster lost in a man??

If you aren’t equipped with strange, out of this world powers then you just have to hit him with your smarts! That’s exactly the advantage The Riddler has over Batman. He’s a puzzle guy; a bizarre algorithm of facts and silly problems to be solved. He keeps Bruce Wayne guessing all the time. First seen in the October 1948 Batman serial, The Riddler is a tried- and- true example that knowledge really is power.

What a ridiculously wonderful character! Thinking back on the old Batman (1966) television series, Frank Gorshin played up the camp equally to Jim Carrey in the critically and fan panned outing Batman Forever (1995).

In the future, Edward Nygma is a villain who deserves a much darker perspective as well. Franchise directors take note!

She is a botanist whose real name is Pamela Lillian Isley. She is an eco-terrorist that uses plant- based toxins and mind- altering pheromones for her deviant doings. Her character originally appeared in the DC comic in June 1966. Artist Sheldon Moldoff said he modeled her physique after Bettie Page.

She’s a girl’s girl, having shared the spotlight with the likes of other famous female Bat protagonists. At one point, she and Harley Quinn were romantically entangled. Hello fellow fanboy (and girl!) geeks!

In her slinky green colored onesie, Poison Ivy was depicted by Uma Thurman in Batman and Robin (1997). Unfortunately, the story line in that film did not give the sexy plant lady justice. It was a waste of a great actress on an even greater character. There’s always room for improvement Hollywood………

He is an ultra-jacked prison inmate who escaped from his cell in South America to ultimately torment Batman with his physical strength and assassin-like intentions. He was created by writers Chuck Dixon and Doug Moench, and originally drawn by artist Graham Nolan in Batman: Vengeance of Bain # 1 (January 1993).

He is well read, and a die-hard bad ass to boot. He committed his first murder when he was only eight years old. He shanked a fellow inmate who tried to use him for prison information.

While incarcerated, Bain has a best friend. Behind bars, a stuffed bear named Osito (Spanish for little bear) exists as his one and only companion. Innocent appearing at first, the teddy is ultimately just a stash spot for his shive. A weapon to ward off the vagrants within the prison walls.

This terrorist is intelligent, tormented and strong. His character was silly in Batman and Robin (1997), then brought to a much more extreme level later on. Tom Hardy’s voice alone in The Dark Knight Rises (2012) brings chills up the spine. His short stature, yet muscular build created a caustic presence.

She’s been a friend and a foe to the Batman since day one. A worthy opponent, her initial appearance was actually in the very first Batman released comic in 1939 titled “The Case of the Chemical Syndicate.” Back then she was simply known as The Cat. Her appearances often times contradicted her hate relationship with Batman for love.

The Selena Kyle character has had various incarnations throughout the years. As a victimized secretary in Batman Returns (1992), Michelle Pfeiffer made her sad, and then very sexy. Other times she’s been savvy and very sexy like Anne Hathaway in The Dark Knight Rises (2012). The pure carnal lust between her and The Batman has always been palpable.

In Batman Returns (1992) the Penguin is portrayed as a vengeful circus freak prone to darkly comedic antics like biting off the nose of a political reporter……. just out of spite. In the recent 2014 television series Gotham, he is played as a mischievous mobster much more level-headed than Batman’s other nemeses. Actor Robin Lord Taylor brought a younger, fresher, hipper angle to the legendary umbrella toting birdman.

He’s been represented as a monster and as a man, much like his rival Bruce Wayne. Oswald Cobblepot is a squeaky voiced criminal who may or may not have been raised in the sewers of Gotham City. And there’s no denying Danny Devito was snubbed an Oscar nom for his portrayal of the ghastly grotesque in Batman Returns (1992).

The ultimate Dark Knight outlaw is a master manipulator. He’s a clownish chameleon whose origin story is always up in the air. Every version is very different from the one before.

This insane, pseudo-buffoon first appeared in the premiere issue of the comic Batman (April 25, 1940.) The artist responsible for his ingenious introduction is up for argument. Bill Finger, Bob Kane, and Jerry Robinson have all claimed fame to his initial conception. The matter has never been officially resolved.

In the 1950’s DC ran with the Joker’s character. He was at first depicted just as a goofball trickster. Then in the early ’70’s creators captured him in a much more sinister light. They revealed a back story involving the murder of Batman’s ward Jason Todd, and the paralysis of his ally Barbara Gordon.

He loves using chemical waste and poisons to intoxicate Gotham. He is probably the most disliked of Batman’s enemies primarily because he refuses to work well with others. Harley Quinn of Suicide Squad (2016) fame was the former psychiatrist for Mr. Joker. They eventually find their insidious connection and embark on a romantic murder extravaganza together.

A modern legend in his own right, Joker is the only character in film history to win two different actors Academy Awards for the same, sort of, role. Heath Ledger posthumously received his honor for portraying a truly psychotic version in The Dark Knight (2008). Joaquin Pheonix explored his origins in Joker (2019). Jack Nicolson’s manifestation said it best though in Tim Burton’s 1989 version: “Ever dance with the Devil in the pale moon light?”