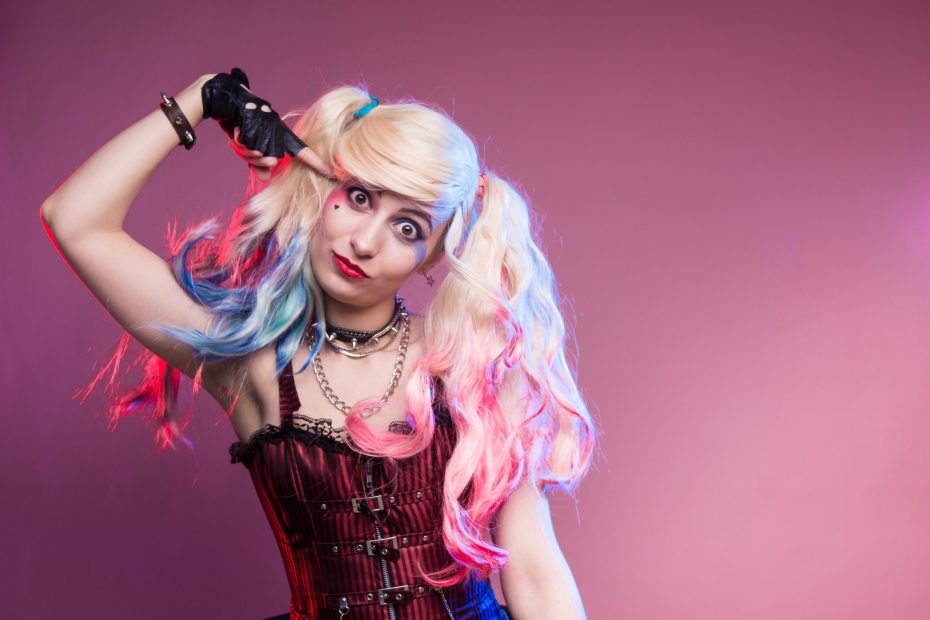 Girl’s rule! In the realm of Comic- Con, they come in all shapes and sizes. From sexy to spooky, the female persona has the ability to reach any level and every limit beyond. Here are just some of the best examples of girl empowerment through costumes and decor.

She has always been one of the most famous Disney villains ever, but the popularity of Cruella (2020) brought this fame to another level. She is nasty, crass, and always brash. Her style is legendary, and her hair will always turn heads. She may be a dog murderer, but she’s convinced herself and her followers that this is all for a certain wonderful purpose. She started cleaning toilets then became a window dresser. From there, the sky was the limit. Eventually with her own design house, she stops at nothing to make fashion a way of life. With the deaths of a few dogs along the way of course.

Her look is legendary. The iconic wig! Black on one side, white on the other. Split directly down the middle. If you wanna go for her look, use a skin primer to disguise fine lines and flaws along your mug. Choose a light- colored skin tone, covering your face. Apply white setting powder to stick the color.

With a matte palette, use the natural shape of your eyebrows and conceal them with a subtle mixture of black and brown shades. Bring some of the matte black down, add white eye shadow, black eye liner. Finally, introduce the horrifying smudgy eyes so reminiscent of Emma Stone’s look in Cruella. And don’t forget the bitchy attitude!

This tiny beauty is Peter Pan’s right- hand lady. She wishes to be his one and only but must succumb to his rejections. She has been depicted in the Disney cartoon Peter Pan (1953), and by America’s sweetheart herself Julia Roberts in Steven Spielberg’s Hook (1991). In every case, she is the friendly fairy determined to help out the boy who refuses to grow up. A pair of fairy wings, a little skirt, and A LOT of glitter will go a long way in creating this Comic-Con look!

The animated series first aired in 1969 and the memorable members of the Doo-crew have since continued on. The live action films in the 2000’s introduced a whole new generation of kids to their ghostly antics. Velma was always assumed to be a lesbian. Her butch, matter of fact manner stamped her with this stereotype as early as the cartoon’s origin. Daphne, on the other hand, was a young woman with both conventional female beauty and street smarts. She and Velma are great friends besides their apparently differing, well, preferences.

The Queen of Hearts from Alice in Wonderland

This horribly tempered bitch was created by author Lewis Carroll in the 1865 children’s book “Alice’s Adventures in Wonderland”. She has been represented multiple times since, in various incantations. Most recently by Helena Bonham Carter in her then boyfriend Tim Burton’s retelling of the classic tale Alice in Wonderland (2010). With her giant head and fists of fury, her mantra will never be forgotten. “Off with their heads!!”

Her appearance is pretty simple to conquer. Get yourself a white face paint/cover. I recommend a Krylolan stick or Super White coloring from the makeup company Ben Nye. Draw on two slim black lines over each eye to represent her eyebrows. As for eye shadow, Sugar pill makes a brilliant blue that will pop and cover the entire eye lid. Don’t forget the tiny crown on top of her head of red hair. And don’t leave your temperamental attitude at the door!

This sneaky sex pot has been depicted numerous times in popular culture. She’s a burglar, a hood and a beautiful woman. Her skills as a primary opponent to Batman surpass those of her male counterparts (Joker, Penguin, Riddler, etc…) simply because of her sex appeal. She’s got the woman’s touch when it comes to her discourse with the Big Black Bat. With a pair of elbow length black gloves, a set of cat ears, and a tight slinky body suit this look can be easily accomplished.

Pauley Perrette was the one that brought the darkness to this show. Beginning in 2003, this forensic pathologist was a skillful, sought-after genius. She had a fashion flare for the gothic. With her short bangs and jet- black hair she will always be the most memorable member of the cast of this hit CBS show.

She is the iconic Mistress of the Dark. She put cringe worthy B-movies on the map. With her comic chops and black humor, she captured the hearts and groins of nerds all over the world. Her busty physique and pasty perfect complexion are the stuff wet dreams for Comic Con geeks are made of! She’s a classic.

Her ensemble is provocative, but easy to obtain. It’s a black synthetic fiber wig styled into her signature look. Then of course her tight-fitting dress, slit high up on the side. The sleeves though have to been flowing. This is a signature Elvira aspect. Form fitting around the waist, harsh and wide around the wrists.

Her popularity reached a peak with the hit movie Suicide Squad (2016). Then in the spin off Birds of Prey (2020). Before this though, she was a comic book queen. She was popular in the DC world, known for being the Joker’s former girlfriend. Her costume is bright and scary simultaneously. She is a punk rock vision of female empowerment.

Dressing up as her would be easy! She has the bleach blonde hair, streaked throughout with a faded rainbow of colors. Her makeup is ghost white face paint, contrasted by her bright red lipstick. Don’t forget about the essential tiny black heart tattoo right under her eye.

She is the epitome of teenage angst. She lives in her own dark room. One, big, dark room. Winona Ryder played her in this role of a girl dressed entirely in black. She’s the Ghost with the Most’s soon to be bride and her wedding ensemble is essential to chick Comic-Con doers and shakers. AND she can see ghosts! What more could a comic book geek want in a girlfriend? In general, this princess of darkness needs to a black veil, black satin gloves and a long flowing black dress to cover the look. Oh! But don’t forget the shoulder length BLACK wig with short- cropped bangs. That is essential!

This high horned witch certainly casts a spell. She is tall, brooding and well…. magnificently Maleficent. Sleeping Beauty’s primary antagonist is an evil fairy and the self-proclaimed “Mistress of ALL Evil.” Her slender build and high, Joan Crawford-like eyebrows have made her appearance very popular at Comic-Con conventions.

Her look is simple to replicate. All you need are the dramatic horns over your head, a black dress and cape filtered with a touch of dark purple. And, of course, a sinister smile on your face with lips smothered in bright red lip stick!

She is the legend in the realm of girl costumes. This heroine is one of the founding members of the comic classics involving The Justice League. She’s the all-American gal with a bad ass attitude to boot. She’s also a Robin Hood of sorts, helping those in need without the expectation of a reward. She is a superhero with exceptional athletic, acrobatic, and combat skills.

She’s a lady with all the powers of her male counterparts, and more. Forget Supergirl, this character has an identity all her own. For this look, a simple packaged costume would do. She’s a female American flag come to life.

This mutant, like the other X-Men, was born with superhuman skills. She is a shapeshifter gifted in the ability to copy the carriage of any person she comes into contact with. She is a villain, using her powers for the greater worse of the world. She’s posed numerous times in many different personas. She’s a slick mother…….

The makeup for this character can be done complexly with the help of a professional. It’s also completely doable on your own. A simple blue body spray is essential. Her hair can easily be slicked back and topped with a red colored hair spray. Her scales can be created using a third-degree silicon component. Plastic adherable gemstones should definitely also be applied to add that next dimension to the look.

This eco-terrorist, obsessed with environmentalism, uses toxins from plants to infiltrate her devious objectives. Underneath it all though, she kind of has good intentions. She strives to save the world’s natural environments. She’s also a sexy scientist whose outfit definitely hits home for nerds at Comic-Con conventions.

She is the vision of a sword swinging, swashbuckling sorceress. Her bikini armure is a staple annually at Comic-Con. The slinky chainmail she adorns is usually always paired with thigh high boots and a gaggle of gaudy gauntlets. She has been said to be bisexual, adding another layer to her appeal. For the boys and the girls.

She’s the original Elviria. Without the sardonic sense of humor but with a sicker sense of sensuality. Like Elvira, she was also a horror-hostess with the mostest! Her character is the daughter of Lilith, a princess of darkness. This is also, seemingly intentionally, the name of Frasier Crane’s morose wife on the classic television sitcom Cheers (1982-1993).